What is the Texas Constitution?

The Constitution is the foundational governing document of the State of Texas, second only to the U.S. Constitution. All Texas laws and regulations must comply with the Constitution or risk being invalidated by the state courts.

Texas' constitution is one of the largest state constitutions in the U.S. - only Alabama's and California's are longer. It's notable for including a lot of very specific topics, including local government, taxes, and private property rights, that many other states leave to their legislatures. Because of its unique history, Texas has chosen to protect these topics in the strongest way possible. However, the drafters of the Texas Constitution recognized that this high level of detail meant that the Constitution could easily become outdated and would need to be changed to keep up with society. They therefore made it easy to amend, and it has been amended nearly 500 times, more than only 3 other states.

These two factors - the length and the ease of amendment - mean that in Texas, the Constitution functions more as an adjunct to the statutes than a static set of governing principles. It is a dynamic, living document and was designed to be changed to reflect the growth and development of the state. This makes it very much a part of Texas' legal and political landscape – in Texas, unlike at a national level, amending the Constitution is a very valid way of changing the law.

History of the Texas Constitution

In keeping with Texas' dramatic history, the Texas Constitution has gone through several different versions. Below is a brief timeline of the various Constitutions and their importance in the overall constitutional history of Texas. Each entry includes links to the text of that version and to its Handbook of Texas article.

1836: Texas Declaration of Independence & Constitution of the Republic of Texas

This was the first governing document of the Republic of Texas after it won independence from Mexico. It was a very short document based heavily on the U.S. Constitution. It was never amended and was in effect for only a few years before Texas joined the United States.

Handbook of Texas article on the 1836 Constitution

Upon joining the United States, Texas redrafted its Constitution completely. It became longer and more detailed, although it was still nowhere near the length it would eventually become. This Constitution is notable mainly for creating Texas' free public school system and school funding system.

Handbook of Texas article on the 1845 Constitution

When Texas seceded from the Union, it adopted this Constitution. The changes from the 1845 Constitution were minimal and consisted mainly of revising terminology to reflect Texas' membership in the Confederacy.

Handbook of Texas article on the 1861 Constitution

This temporary constitution was adopted immediately after the end of the Civil War when Texas was under the jurisdiction of the federal government. This Constitution was not intended to be the final governing document of the State; it was a placeholder meant to quickly get rid of the Confederate constitution and implement the requirements of Reconstruction. As such, its main effects were to abolish slavery and grant civil rights to African-Americans. It also for the first time gave the governor the power to exercise a line-item veto over budget provisions.

Handbook of Texas article on the 1866 Constitution

This Constitution is notable for never actually being completed or adopted by the Legislature. After the Constitutional Convention failed to agree on a final draft, the federal military forces occupying Texas took over and pieced together a Constitution from the various proposed articles. This is the version that was ratified by the public. This Constitution is notable for more explicitly abolishing slavery and guaranteeing civil rights to all citizens, in compliance with the Reconstruction Acts passed by Congress. However, it also included several provisions that greatly upset many Texans and paved the way for the next Constitution. Most notably, it stripped voting rights from former Confederate officers and vested immense power in government officials, especially the governor.

Handbook of Texas article on the 1869 Constitution

In reaction to the perceived abuses of the 1869 Constitution, the 1876 Constitution established the pattern of a long, restrictive document intended to act as a check on state government power. It substantially restricted the governor's powers and went into great detail on many relatively minor issues. This excessive detail was intended to prevent state officials from taking advantage of vague language in order to usurp local governance. It also created the state's unusual double supreme court system. This Constitution, in greatly amended form, is still in effect today.

Handbook of Texas article on the 1876 Constitution

In 1974, a Constitutional Convention was held in order to modernize and streamline the 1876 Constitution, which was viewed as cumbersome and outdated. However, the proposed revision failed by only 3 votes and was never submitted to the voters. The Legislature attempted to incorporate some proposals via constitutional amendments the next year, but all eight proposed amendments were defeated. Although the process did not result in a new constitution, it did leave a lasting legacy in the form of a trove of valuable research materials for constitutional scholars and historians.

Handbook of Texas article on the 1974 Constitutional Convention

Where can I find it? 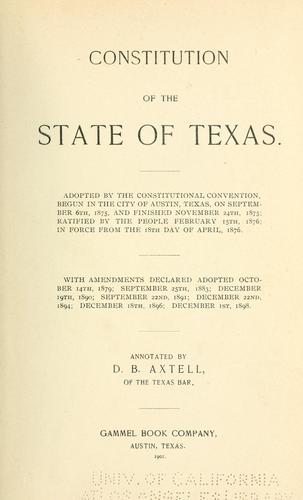 Current and past Constitutions can be located electronically on the Tarlton Law Library website and on the Texas Legislature Online, as well as most free legal research websites. The Texas Legislative Council publishes an updated version of the Constitution every two years on its website.

Amendments to the Texas constitution originate as joint resolutions in the Texas Legislature, then go to the voters for approval. As of 2019, the current constitution has been amended 498 times. All of these amendments, as well as those that were on the ballot but did not pass, can be found in the Texas Legislative Reference Library's searchable database of amendments. This database gives important information about each amendment, such as election dates and vote totals, and provides links to the original joint resolutions and to secondary analytical materials.